Settling in Saskatchewan: Sponsoring Refugees and Displaced Families in Your Community 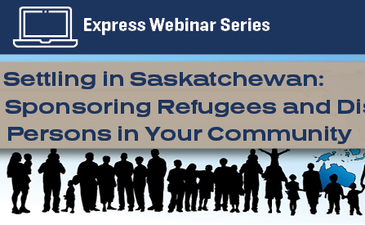 Settling in Saskatchewan: Sponsoring Refugees and Displaced Families in Your Community

On February 24, Russia launched a large-scale invasion of the Ukraine. Since then, more than 5 million people have fled the country. Annually, millions of people are displaced from their homes as a result of wars, persecution, violence, human rights violations, and the effects of climate change.

According to the United Nations High Commissioner for Refugees, global numbers for displaced persons exceeded 84 million in 2021.

Are you wondering on how you could welcome individuals or families who have been forcibly displaced from their homes to your community? Join us on May 17 at 10:00 a.m. for the SUMA webinar Settling in Saskatchewan: Sponsoring Refugees and Displaced Persons in Your Community. During this webinar we will be joined by presenters from Immigration, Refugee and Citizenship Canada, Government of Saskatchewan, Ukrainian Canadian Congress of Saskatchewan, and Saskatchewan Association of Immigrant Settlement, and Integration Agencies to learn about the different processes and programs available for refugees, displaced persons, and newcomers settling in Saskatchewan.

As part of our Express Webinar Series, you will hear short presentations from each presenter, followed by more time for your questions.

This webinar will be moderated by April Phillips, SUMA Director, Northeast Region

If you can't make it to the live event, don't worry! A recording will be sent out to all registrants. If you have questions you would like answered during the session, put them in the Questions and Comments box below and we will ask them on your behalf.

This webinar is sponsored by SUMAssure. Non-members are invited to join us, free of charge, for this learning opportunity.